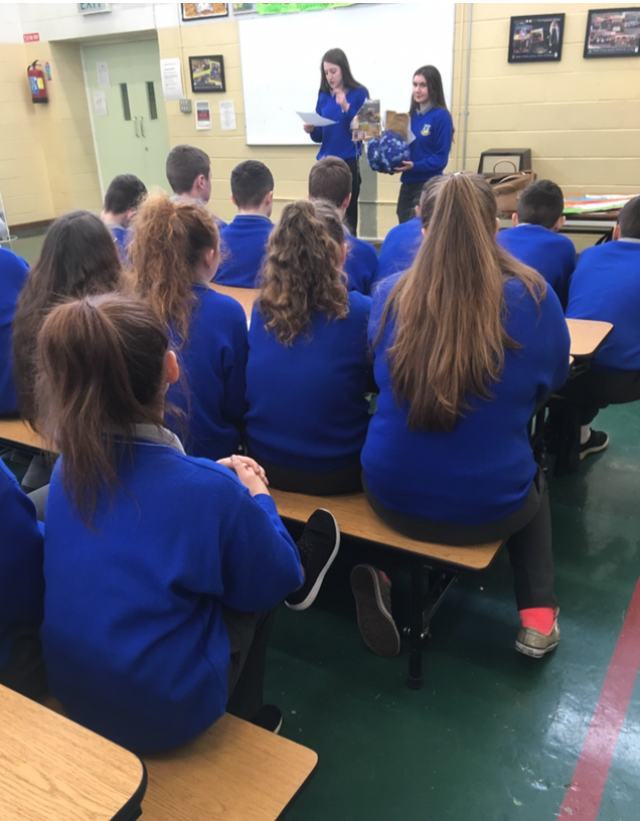 As a group we set up workshops for the first, second and third year students about the conservation of water. We also organised workshops for 3rd, 4th, 5th and 6th class in our local primary school. In these workshops we all had a role in talking about a number of challenges including the following headings; Secret Water, which was about how much water is used in for example in  tea and coffee. We spoke about interesting Water Facts. The Water Cycle, which showed the students where we get our water from. Water treatment, which showed the stages water goes through before it is available to drink. After that, we showed the students the world’s access to water. From the map it was clear Ireland has 100% access to water in comparison to third world countries, who have as little as 31% access. The drenched or dry challenge was next. This challenge was about how many countries, such as those in Africa, are in need of rainwater and how countries, such as Ireland, receive too much rainwater. We then gave some Water Safety Tips. For example turn off the tap when brushing your teeth. These tips were very useful and reminded the students how easy it is to save water, no matter how small a task it is. We spoke about the posters with the slogan, “Don’t be a drip, save every drop”, that has been placed all around the schools, near taps, to remind the students to turn off the tap properly when they are finished using them. We performed a dance to make students aware of dripping taps and not to overuse water when it’s not needed! We finished the workshops with a short rap ‘as gaeilge’ to highlight once again for students the contrast between countries like Ireland with excess rainfall and those in Africa with too little

From modest beginnings in 1995, Global Action Plan Ireland have grown into a mature, national organisation that empowers as many communities as possible to adopt a greener lifestyle and thereby play their role in protecting planet Earth.