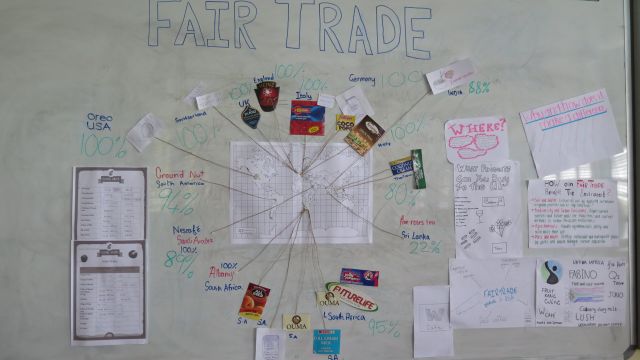 The fair trade challenge was done by 60 grade 10 pupils. They brought packaging from home or researched on the internet where various products came from. This was collated onto a large map of the world and a piece of string indicated where each product came from. The percentage of the population having access to clean water in each of these countries was recorded on the map. It would appear that most of our food comes from countries that have the most access to clean water.

The amount of secret water found in various food products researched and recorded in a table. The various stages in production needing water were discussed for tea and a couple of the other products. Pupils were amazed how much water is needed to make red meat especially and pledged to eat less red meat. Pork and chicken has a smaller water footprint. Being vegetarian would obviously be the best option, although some were loath to give up meat completely.