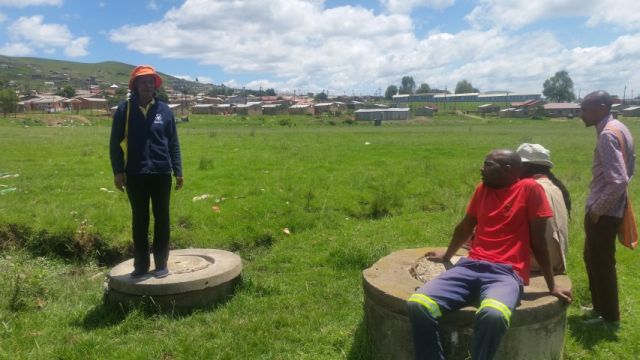 Nohlanipho Zondo proudly shows us the once flowing manhole

Today, Enviro-Champ chairman, Ayanda Lipeyana led a sewage excursion through Mpophomeni to allow us to better understand the sewage issues that Mpophomeni faces. Following the Umhlanga and Umthinzima stream which flows into Midmar( a big reservoir dam providing potable water for PMB and Durban) we were tasked to look out for discharging manholes and leaking water borne sewage pipes. Regrettable, Mpophomeni has grown exponentially in population and the aging sewage bourne infustructure is unable to keep pace with the pressure and demands of so many households. With an insufficient sewage pump stations and a gentle gradient, the piped sewage removal is sluggish resulting in blockages and sewage spills. Not having proper recycling facilities, people sometimes also use manholes as dump site for their mounting waste. From an aerial photograph, it is not uncommon to see green pools of eutrophic water entering Midmar dam which in turn is putting pressure on the Water treatment plants to purify the water to drinking quality standard. Each enviro-champ has been allocated a number of manholes to monitor and despite the challenges, for first time in 4 years, no spillages were reported in January, 2016. Some of the enviro-champs have also learnt basic plumbing skills to fix leaks rather than simply wait for municipal plumbers to do the job. Surely this is a wonderful example of a “ground swell’ of local people taking ownership and finding solution to their own problems!! Well done Enviro-Champs!!