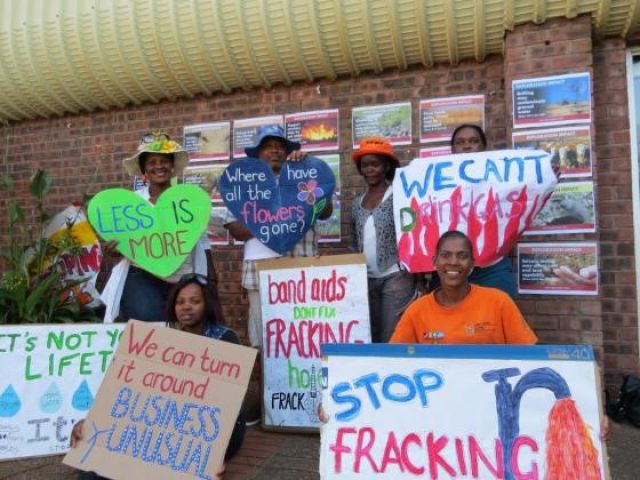 Some Enviro-Champ pose outside for photo

Today the Enviro-champs got the opportunity to listen to a fracking presentation. Some of the members then decided to write powerful messages against Fracking to be sent to the Minister of Environmental affairs, whilst others designed poster to be taken to a local Fracking public participation meeting. Ten members then joined 230 other protesters to express their dissatisfaction. Below is an extract written for the Umngeni Blog site- River Walks about this chaotic Fracking meeting!!

A common refrain throughout the meetings was “Why have so many countries banned fracking?” and “How could South Africa, a third world country, hope to improve on safety standards?” Rhino indicated that they would hire experienced first world contractors (oops, there go the jobs) and be the first company to undertake fracking or extraction without any incidents. This would be a remarkable achievement, not accomplished by any other firm in the world as far as we are aware! It was clear that they think that that once a well has been fracked and the methane ‘burned off’ it can be abandoned and pose no further risk. Do they really believe that the concrete casing will not eventually degrade and leach heavy metals into groundwater? Have they not heard about acid mine drainage?
Francois du Toit said afterwards “No amount of jobs or economic benefit can mitigate the potential health, social and environmental impacts of an invasive and apocalyptic industry, fuelled only by greed and benefit for a small minority. The real issue is that the community and the general public take all the risks and the companies and government take all the reward. An infringement of our constitutional rights cannot be justified in the name of a growth economy.”
Eventually the crowd, led by a local elder who had opened the meeting with a prayer after the audience had requested so, resolved that they didn’t want this process. There was a mass exodus utterly rejecting exploration and the possibility of fracking. How much clearer could the message be?