Team of the Month
Well done Obed Tech on making such waves in such a short time. What a Terrific Team of the month for April !
Click here
Congratulations
Amanzimtoti
CAPS Links
Sample Resources
Open Top Teams 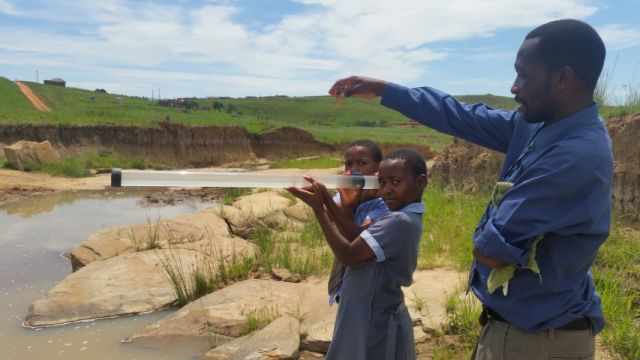 Excited to test out the new citizen science river monitoring tools, four lucky children were chosen to participate in a practical field study of the Reserve River, a small tributary in the greater Tugela Catchment. They were disappointed to be met by a grey, sick looking stream and despite valiant efforts to find macro-invertebrates, there was no sign of life. This was the start of a serious conversation about what could be harming our rivers. On closer inspection as to why the river was so sterile was needed. Using the velocity meter, the children were accurately and easily able to measure the speed of the flow of the water by measuring the distance on a 1 meter plank inserted into the river midstream. By measuring the difference ( In centimetres) between the head flow and the down flow, we were able to look at a chart and find out the speed of flow. The water was moving sluggishly at 0.12 meters per second. The next task was to determine the oxygen saturation of the water, using a chart the children recorded the temperature of the water and then using a dissolved oxygen pill ( in the World Water Monitoring Kit) as a colour indicator of oxygen read as parts per million. Disappointingly the oxygen saturation sat at 49%, half the requirements for a healthy functioning eco-system. The children were the asked to comment on the water colour, it was grey and frothy as a result of people washing their cloths upstream. The phosphate in the soap subs increased the phosphate level of the water reading our highest value yet, of 0.05 parts per million. As soap is very alkaline, the PH of water read 9 far exceeding the operative ph for water which should be between 6.5 and 8. The poor clarity of the water in the turbidity tube read 10cm meaning that the water was murky, an unfavourable place for any life to exist. Although it was disappointing to witness what a bad state the river was in, it was also a novel and empowering experience for the children to make sense of how and why our rivers become degraded or stressed, and our part to make things better.