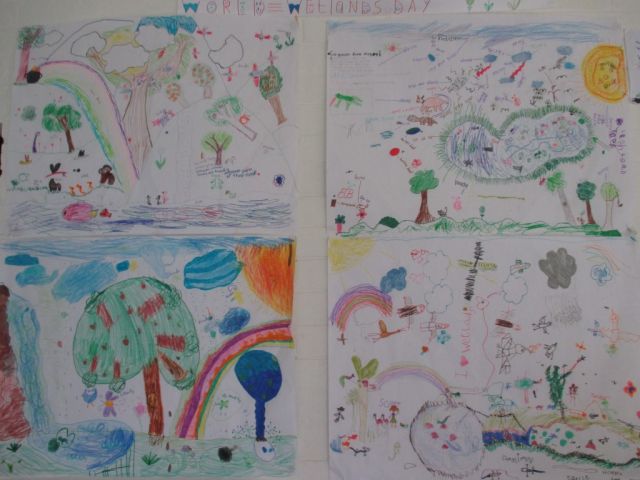 After an introductory presentation on wetlands, their function and importance, the learners were divided into five groups. We had five different stations which the learners rotated from every 15 minutes. The stations consisted of fresh water organisms where the learners had to make a water creature with modelling clay and write four points about their creature; a frog jumping station – we used five different types of frogs found in our area and the information was attached to a stake and placed in a row. The learners had to jump and then read about the frog they landed closest to. The third station was focused on bird migration and why wetlands are important for migrating birds. The learners were blind folded and they had to stick the paper bird on a map. Depending on where they stuck the bird, they received points (similar to pin the tail on the donkey). The fourth station focused on wetlands as a resource; using them to grow food, harvest reeds, fishing and for cultural reasons. At the fifth station, the learners had to write key words on how wetlands are affected by human activity and the consequences thereof. To consolidate the morning, the learners made posters of what they had learnt.