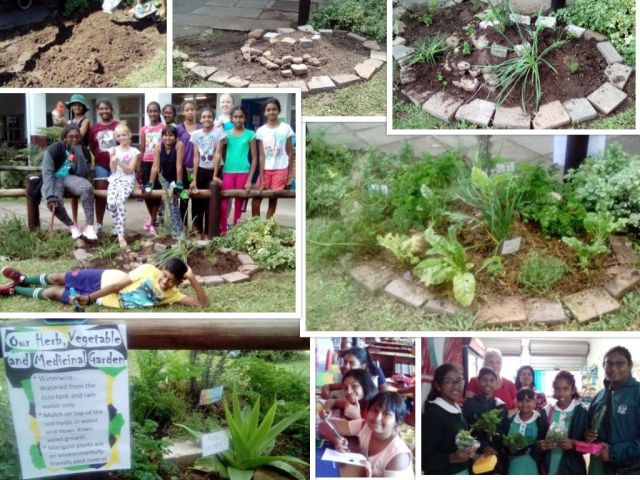 This challenge took many months to do. First, we had to decide what we were going to grow. All attempts at vegetable growing in the past have been quickly eaten by monkeys (except for Swiss Chard which they don’t seem to like)

Our Tuckshop is only allowed to use vegetables from certain sources, but Aunty Shelley said that she would welcome some herbs. We decided to grow both medicinal herbs and the ones the Tuckshop would use, which ended up having medicinal properties anyway. Right at the end, we relocated our Swiss Chard from the Scientific Challenge, as it was in an area with terrible soil.

Finding a suitable place to have our herb garden was difficult, because there is so much shade due to the tall buildings. We spotted a small patch of sunlight right next to a path and near the hall which is good for visibility. Our Green Team dug up the grass and one of the gardeners kindly brought us up a barrow of compost from the side of the school. We also sourced old blocks from the side of the school to recycle them in our garden.

We chose a herb spiral because it is an interesting shape, and because it is raised like a molehill, one can fit more plants in a small area. There is also sun and shade, and low and high water areas created because of the raised shape. First the Green Team, and then the general Water Explorer team did the exercise of planning the perfect place for each herb. They were given a list of the herbs with their growth habit and sun and water requirements, and a diagram of the sun, shade, damp and dry areas of the garden. Once the Green Team had chosen the places for the herbs, they planted them.

Mint was the trickiest to locate, until it was pointed out that there was a section of the garden with moss growing. This was obviously the wettest part of the garden, and perfect for the moisture-loving mint. It was also next to the path, which would stop the vigorous mint from growing all over the other plants.

The following week, we planted some marigold seeds which we took home to look after. When they were tall enough, we planted some of them in the herb garden, as marigolds are a natural pest repellant for some pests. We also mulched the garden with dry lawn clippings. This is to keep moisture in the soil, and to slow the growth of weeds.

The Green Team made signs for the various plants in the garden, and a sign was made explaining why our garden was waterwise.

Over the weeks, our garden has flourished, except for the chives, which were soon munched by monkeys! On Monday, some of the Green Team took a few bunches of mint, thyme, rosemary and parsley to the Tuckshop for them to use in the food. You can’t get much fresher than that!